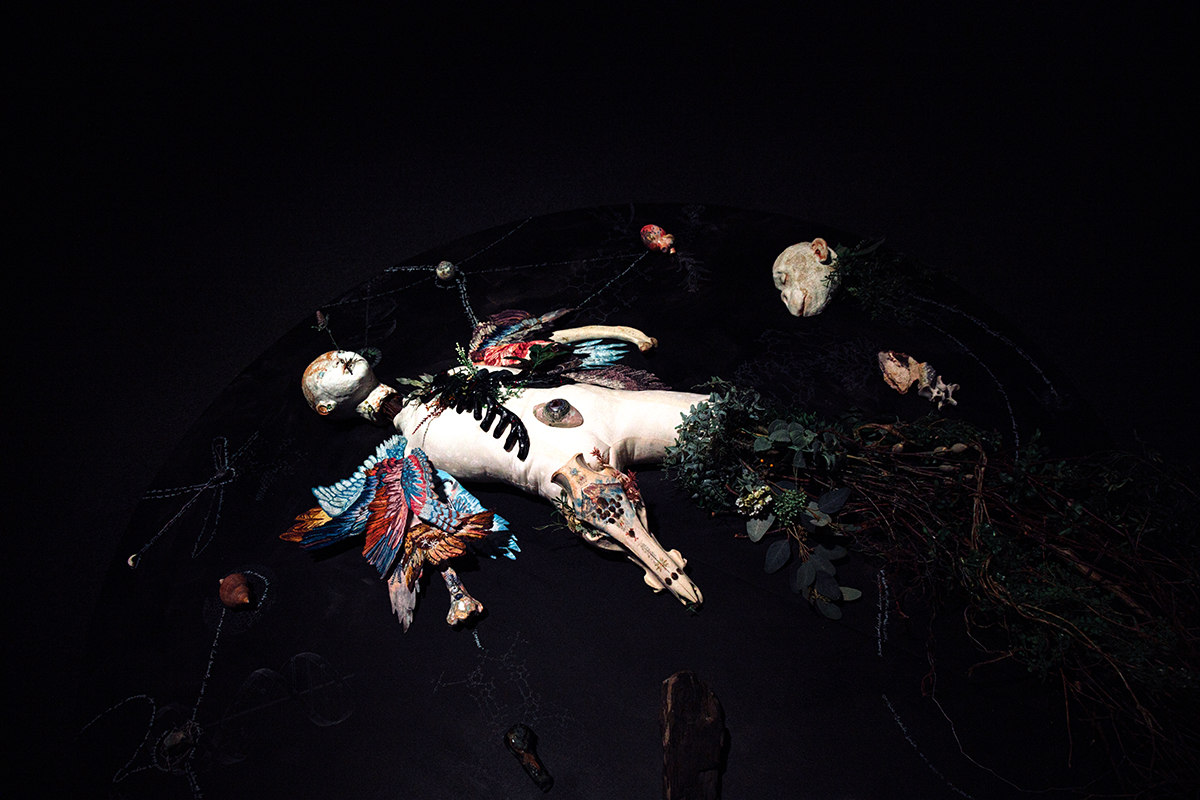 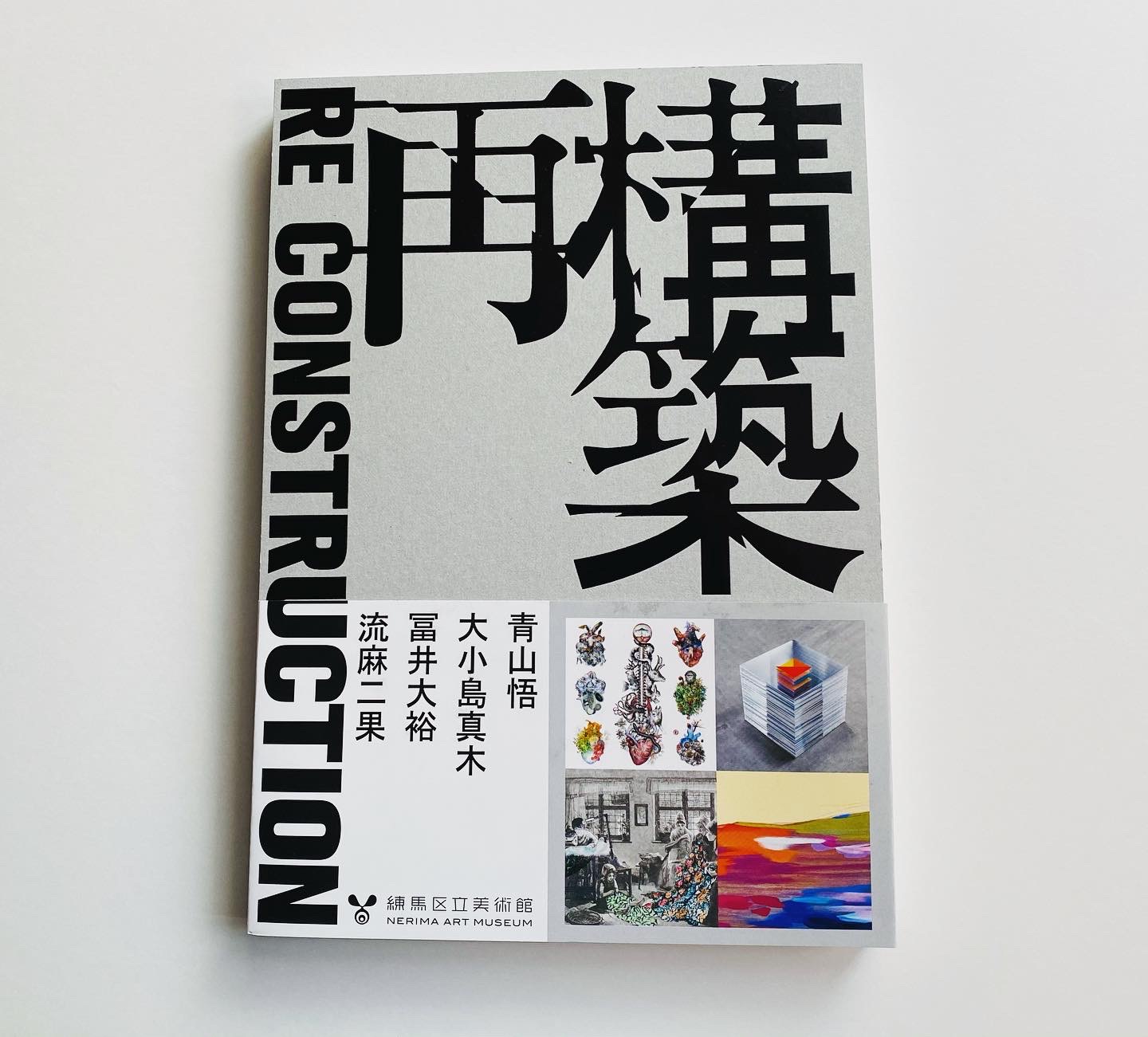 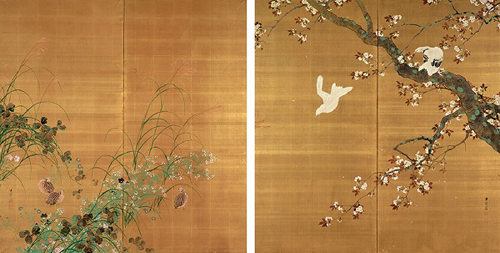 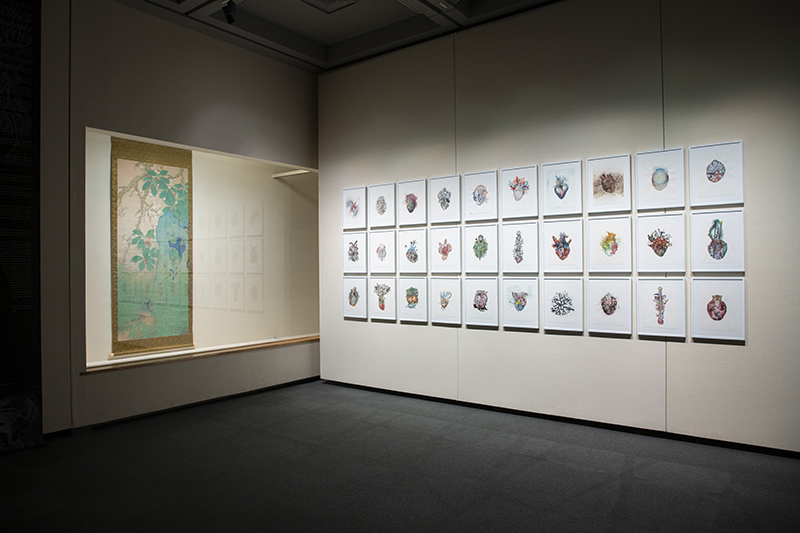 Left: Araki Tokumu, "Early Spring in a Leisurely Garden," in the collection of the Nerima Municipal Museum of Art Photo by Osamu Nakamura 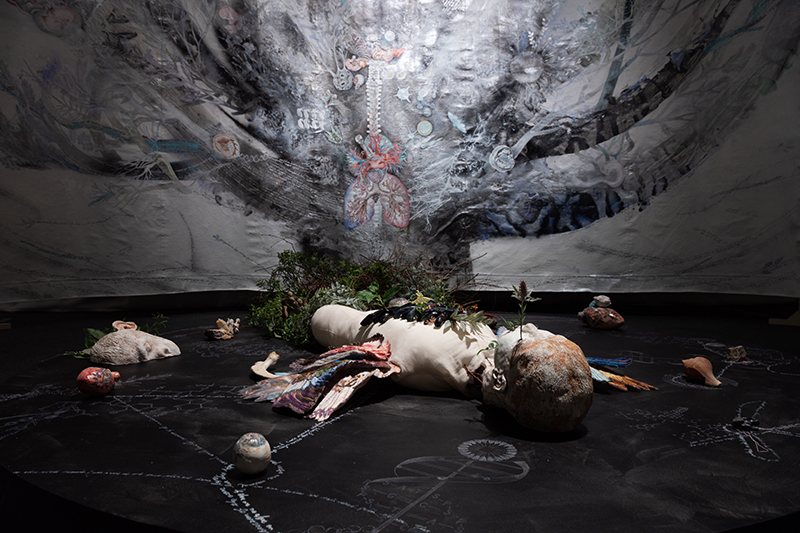 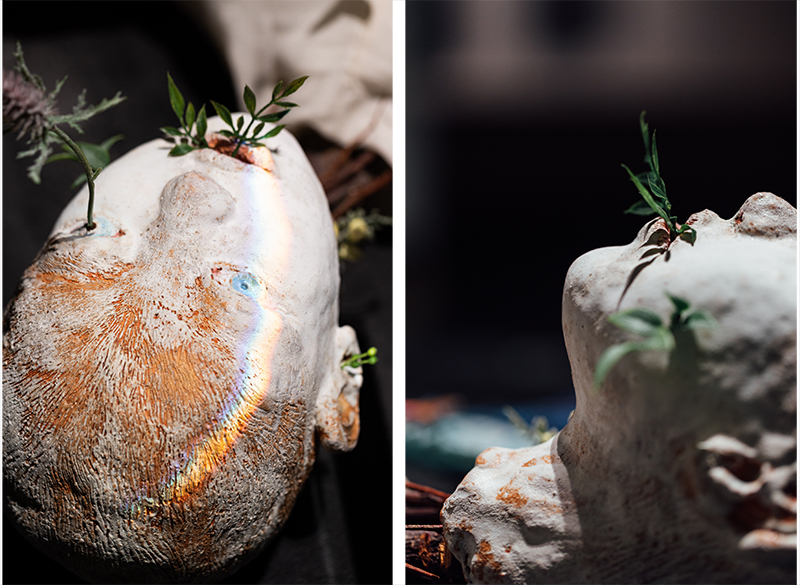 Golem's arms, embroidery with stitched bird feathers by Awashima Girls (average age 73). The bones are made of ceramic. Photo by Kenji Chiga< 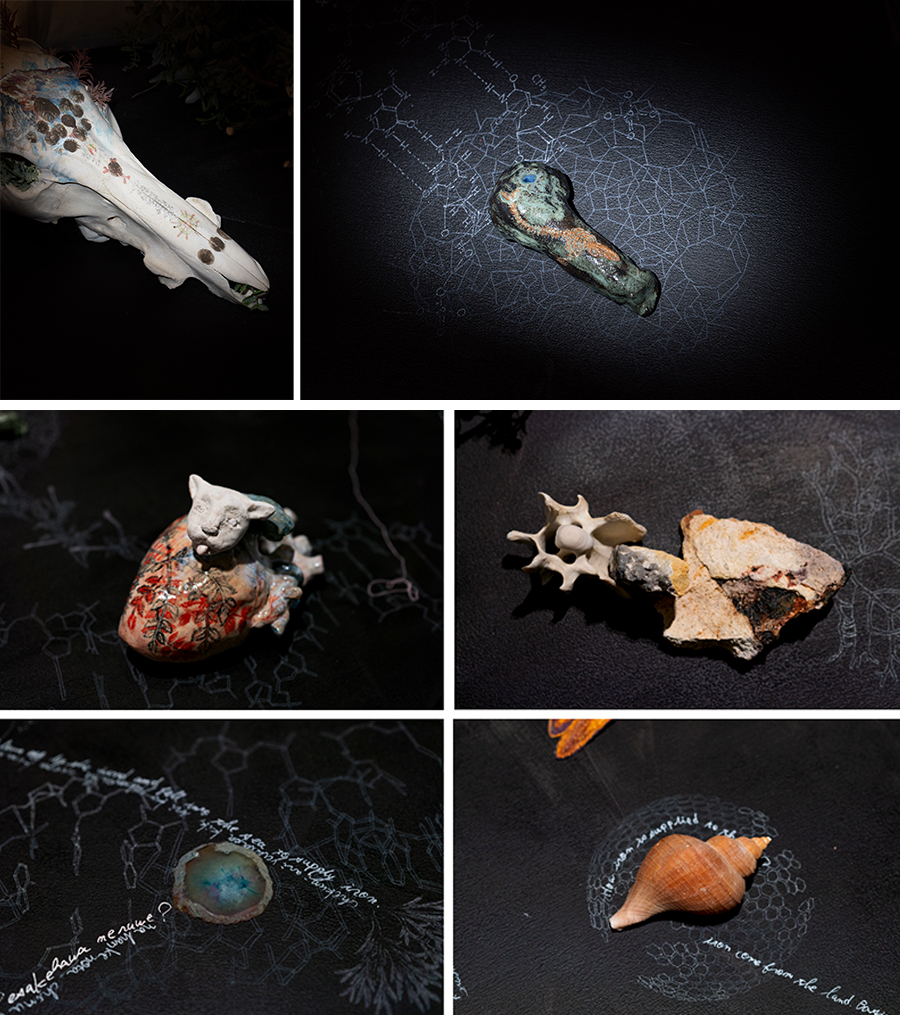 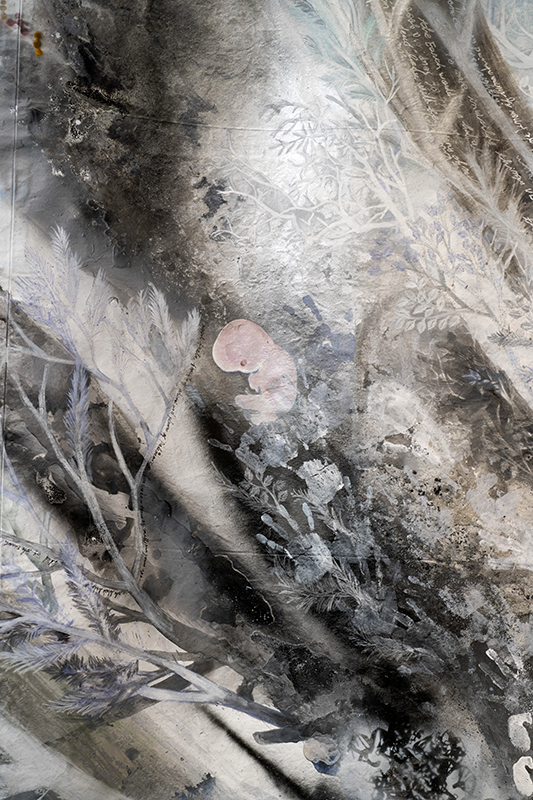 The fetus in the womb tree. Photo by Osamu Nakamura 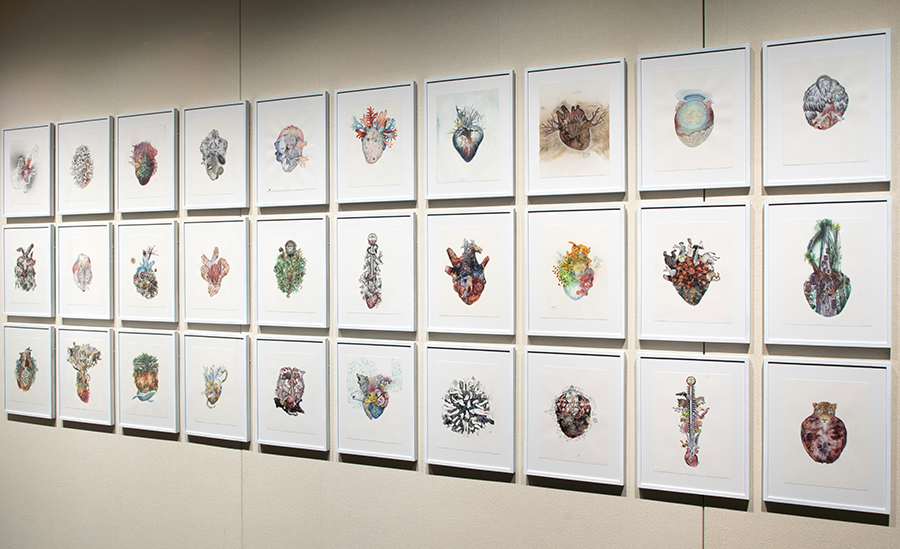 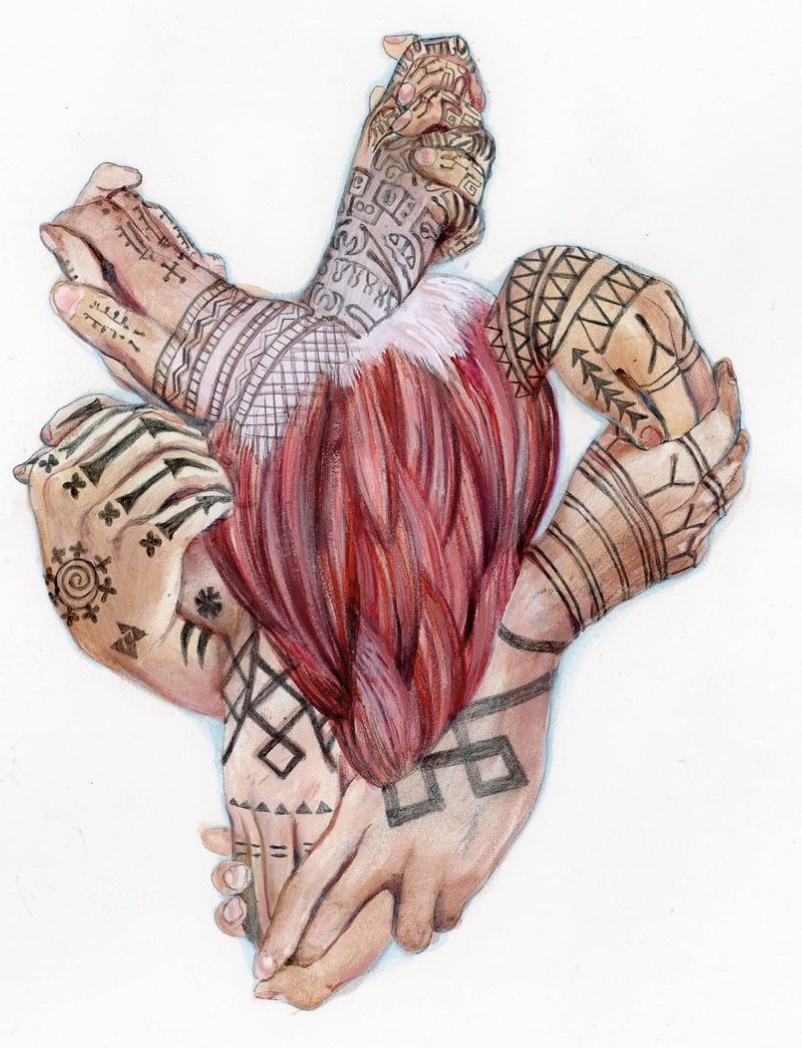 Left: Body | ribs made of fabric Photo by Osamu Nakamura / Right: drawing of what seems to be mycelium of indigenous fungus inside the body Photo by Ohkojima 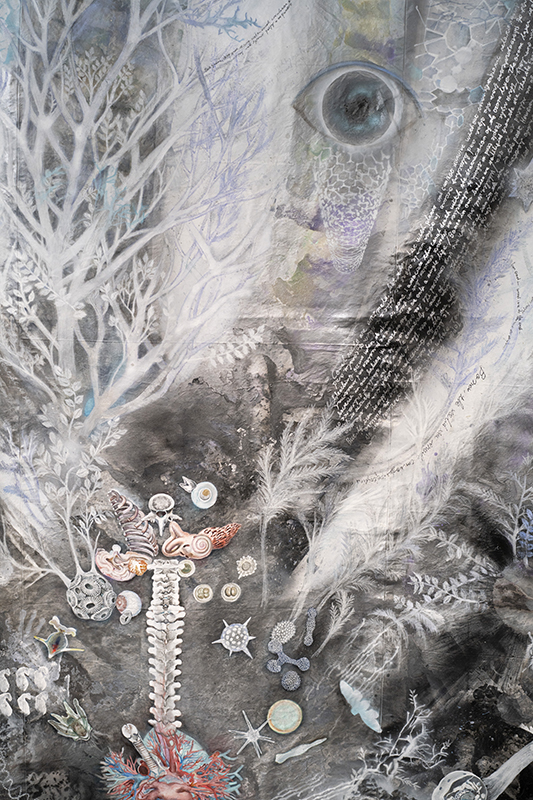 >Detail near the center, from "Womb tree" Photo by Osamu Nakamura 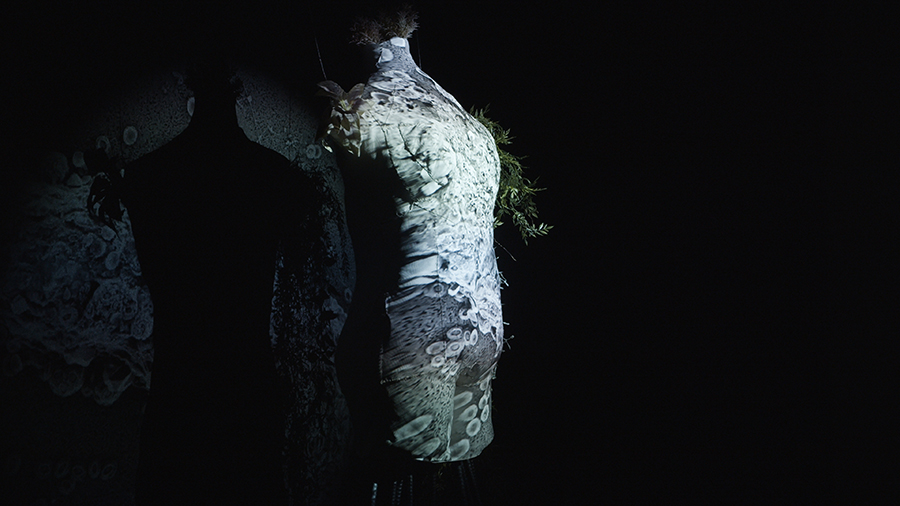 《Venus》Planets and plankton reflected in a skin made of fabric joints. Photo by Kenji Chiga The Place Where Soil and Sea Meet / Topos"
Text and drawings of a trilogy between Oshima and comparative literature/poet Keijiro Kan and biological oceanographer Atsushi Tsuda (moderator: Akitaka Maruyama) *9 Iron is the medium for the chemical reaction between hydrogen and nitrogen used in the Haber-Bosch method.

Golem and Venus
To imagine the “body" not as a single independent entity, but as a "symbiotic sphere" of several beings inhabiting and working together――
Today, our world is said to be in a new geological age called the Anthropocene. I have reexamined our bodies in an era in which human beings have assumed a dominant role within nature and have transformed the earth’s condition. I then reconstructed the image of our bodies as two bodies known as Golem and Venus. At the same time, it is also about reconstructing the image of the life that animates us, surrounded by nature.

Golem
A golem is a living doll made of soil that appears in Hebrew mythology. In fact, the origin of the word "Human" is the Latin word "Humus,” or soil made from decomposed plants, and the golem seemed to me to be a kind of prototype of a human being. Soil is a collaboration between myriad creatures, both living and dead. It is the collective, the result of entanglement, movement, and emergence of all living things. "Humus" is also the origin of the word “humility.” I feel that the word “human" contains a humble gaze, in that it suggests that we are alive by virtue of the entanglement of various entities that soil evokes. The left leg of my golem, a doll made of soil, goes over the pedestal and leads to an odd-looking tree. I drew a spine on the trunk of the tree. The spine is the central trunk supporting our bodies that transmits nerve signals to the brain.

Venus
In Roman mythology, Venus was born from the foam of the sea and became the goddess of the earth. I reinterpreted Venus as standing at the topos where the sea and soil are in contact. The skin covering the body of Venus is filled with a projected film of undersea plankton, which transformed a barren, rocky planet into a planet of life throughout the sea and soil, on top of which is layered a video of planets wandering across the sky and through space. Both plankton and planet feature the Greek root “plan,” meaning “wander.” To wander and float. I think this dynamic process is the very essence of life. The connection between plankton and planet is not just in the meaning of language. The iron that forms the legs supporting the body of Venus also connects the two. The Earth is called an iron planet and iron is an essential element for photosynthesis for plankton. Without iron, most life on Earth would not be able to live, and in fact, the Earth itself would not exist. This is why iron is said to be is the ultimate creation of the universe.
The two bodies that connect the sea and soil, the minuscule and the maximal, exist as a topos where various life and non-life are entangled. And they are also images of our own bodies.